Last year the school I was teaching at organised a field trip to the Kafue National Park for our grade 9 students. It was a fantastic opportunity to have fun camping, enjoy time together as a class, and of course to marvel at the astounding nature and wildlife we have in Zambia. Accompanying the trip as the class' biology teacher, I thought about how to bring across the importance and challenges of conservation work in a park like this. In the end, I hit on the idea of a role-playing game: let the students step into the shoes of a (fictional) park's stake holders, and argue it out for themselves. Fourteen students in charge of developing a national park – what would they do? 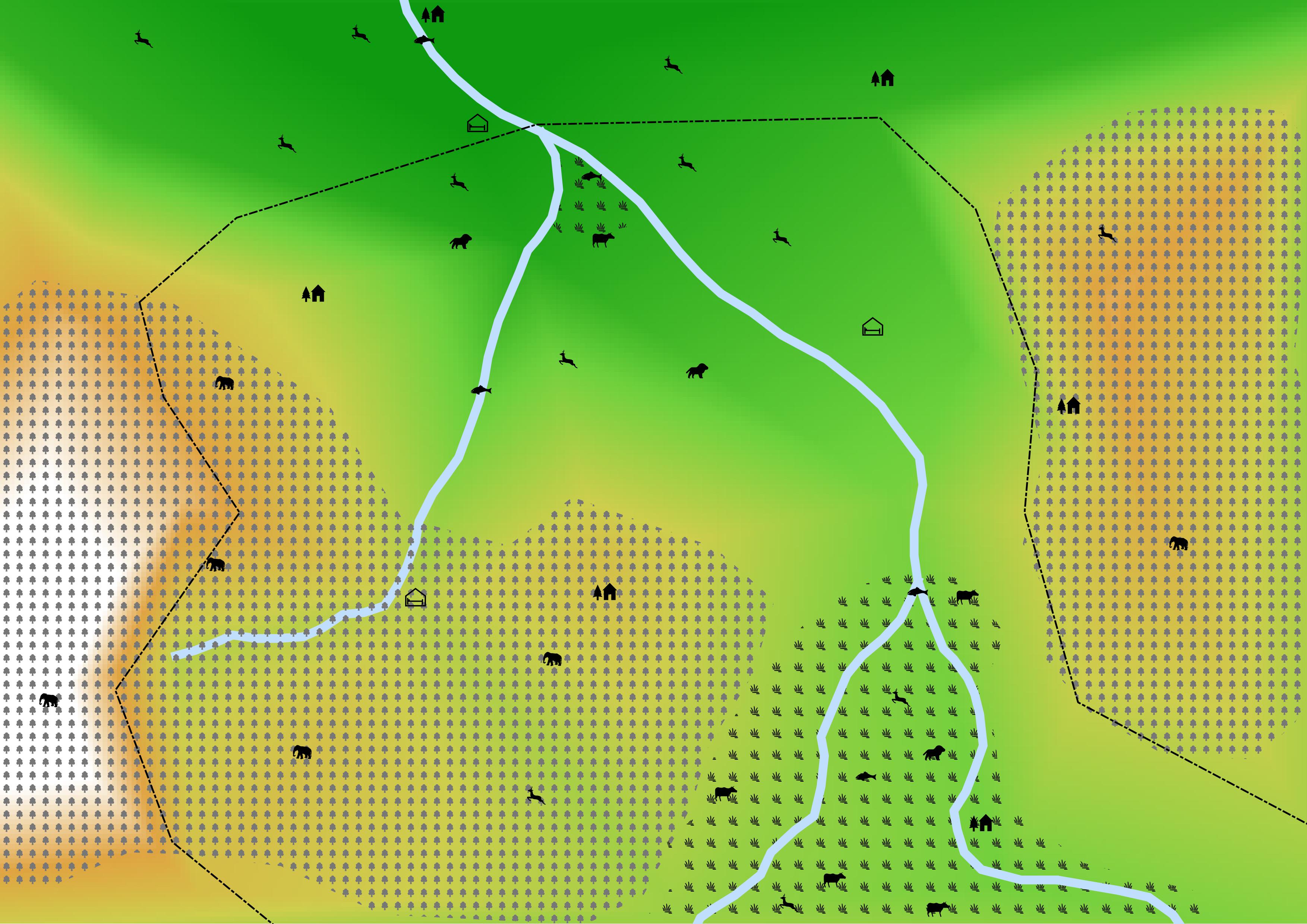 A map of the Liloba National Park

Here is a description of the game as we played it:

I came up with the Liloba National Park to act as the backdrop for our game – its name comes from the Liloba river flowing through it. The park contains the Liloba itself (running north), two tributaries, and the adjoining area. There is a large swamp in the south, forested hills east and west, and grasslands to the north. The Liloba basin has a rich ecosystem with many animals living near the river. Antelope occur predominantly in the plains and often move further north in the wet season. A rare species of small forest elephant inhabits the hills, only occasionally venturing out into the open. The swamps are home to cape buffalo and, along with the river, make for good fishing. Lions and other large predators are rare, but do occur.

The region is the traditional home of the Chilaba tribe. Two of their villages are located inside the park, with a further three on the outskirts. Three lodges in or near the park cater to tourists.

The park is governed by a “park parliament”. This represents all stake holders and takes decisions by voting on proposals by its members.

Each role has a different set of aims, values and priorities. Players should familiarise themselves with the park and their role and think about how they would be likely to act under the given circumstances.

The players are assigned characters, and each character group is tasked with preparing a proposal concerning one scenario. This proposal is then presented to the other players. Once all proposals have been heard, the players are given time to negotiate (we gave them 2h); to garner support for their own proposals or to undermine proposals they consider damaging to their interests.

The game concludes with a session of parliament. Each proposal is debated and voted on in turn. One speaker from each group is given 1 ½ minutes to give his opinion on the proposal, with the first speaker coming from the proposing group. After each group has spoken, the players vote; with an absolute majority necessary to carry the motion. (Players do not have to vote in their groups; for example, the chiefs may be split on whether or not to support the building of the dam.)

We had the greatest fun playing this (or, as staff members, watching it being played out). The students really got into their roles, with heated discussions especially between the conservationists and the politicians – which actually stretched on for days after the game was done. Tense negotiations were held, deals struck, and at least one bribe offered. (We didn't encourage that part!) Although this was a fictitious park, the scenarios were all modelled on actual situations in many of Africa's national parks. Thus, it helped the students to get a perspective on how complex an issue conservation really is. They saw how many conflicting interests there are, that many of these are indeed valid, and how hard it can be to achieve consensus around such decisions.

In the end, the park parliament voted to build the dam and give the villagers electric elephant fences. All other motions were rejected. Not the results I would have decided on myself, but that's what democracy is all about. And when we met a zoologist-turned-lodge-owner the next day, the students knew what he was talking about.

P.S. The game files are available in PDF format here and here.