Imagine a game that lets you earn your way by writing poetry. A game in which you can go on hunting expeditions against fearsome monsters or campaign to be elected magistrate. A game where players run shops and newspapers, and organise tea parties and capture-the-flag tournaments. A game that has been online and in continuous development for almost three decades. Welcome to Discworld MUD.

You wrote worlds with wond'rous words
Full of magic beasts and birds
Of mountains, men and merry mice
Of dwarves and deserts, seas and ice

We browse those worlds, explore the lands
You crafted with your penman's hands
We walk and wander through the climes
And bless these interesting times!

Three years ago, a young wizard called Manutius walked the streets of Ankh-Morpork – greatest and dirtiest of cities – looking for customers. A poor student, he needed funds to continue his studies at the Unseen University. Since he was not enough of a warrior to take what he needed by force, he had taken to poetry, writing short pieces and selling them to any and all who were interested.

Finding generous patrons, he eventually had enough money to take his writing career to new heights. He compiled his poems into an anthology that he printed at the local publishing house and put up for sale in a bookshop. He tried his hand at writing a play for the theater, and was eventually accepted as a journalist for the Ankh-Morpork Daily – a position as financially safe as a writer can hope to achieve on the Discworld.

Along the way, he continued his schooling as a wizard: reading old tomes and hazarding the depths of the Library in order to learn new spells, gaining experience in combat against beggars and brigands. Hearing the call of the mountains, he explored the remote ranges of the Kingdom of Lancre, and, back in Ankh-Morpork, hung their pictures up in his new appartment. He joined a wizard order and dabbled in university politics, once in a while meeting up with his friends in some tavern or another to knock back a drink or two and enjoy a good meal. (After all, wizards like their food!)

That young wizard was, of course, me. And if you are now wondering why you have never heard of such a game, the likely answer is that it is completely text-based.

Here I must digress briefly: Back in the eighties, text-based computer games were all the rage. The game would describe a location or an event and the player would type in simple commands to say what he wanted to do. Role-playing and mystery games were especially popular. Eventually, some people figured out how to make these games multiplayer, and the MUD (Multi-User Dungeon) was born – the precursor to the modern MMORPG. In the end, of course, graphical interfaces became cheaper and more common and game developers switched to making games in which you could actually see what you were doing.

In 1991, a few years before the graphics revolution hit personal computers, a programmer known as Pinkfish created a new MUD. He based it on the Discworld fantasy novels by Terry Pratchett, which, among other things, are known for their fantastic humour. (Second digression: If you've never read them, you really should!) Discworld MUD inherited Pratchett's fictional world and set about recreating it, idiosyncracies and all.

Carried out entirely by volunteers on donated servers, the work continues to this day. To gain an impression of the scale of the world, here is one of its cities: 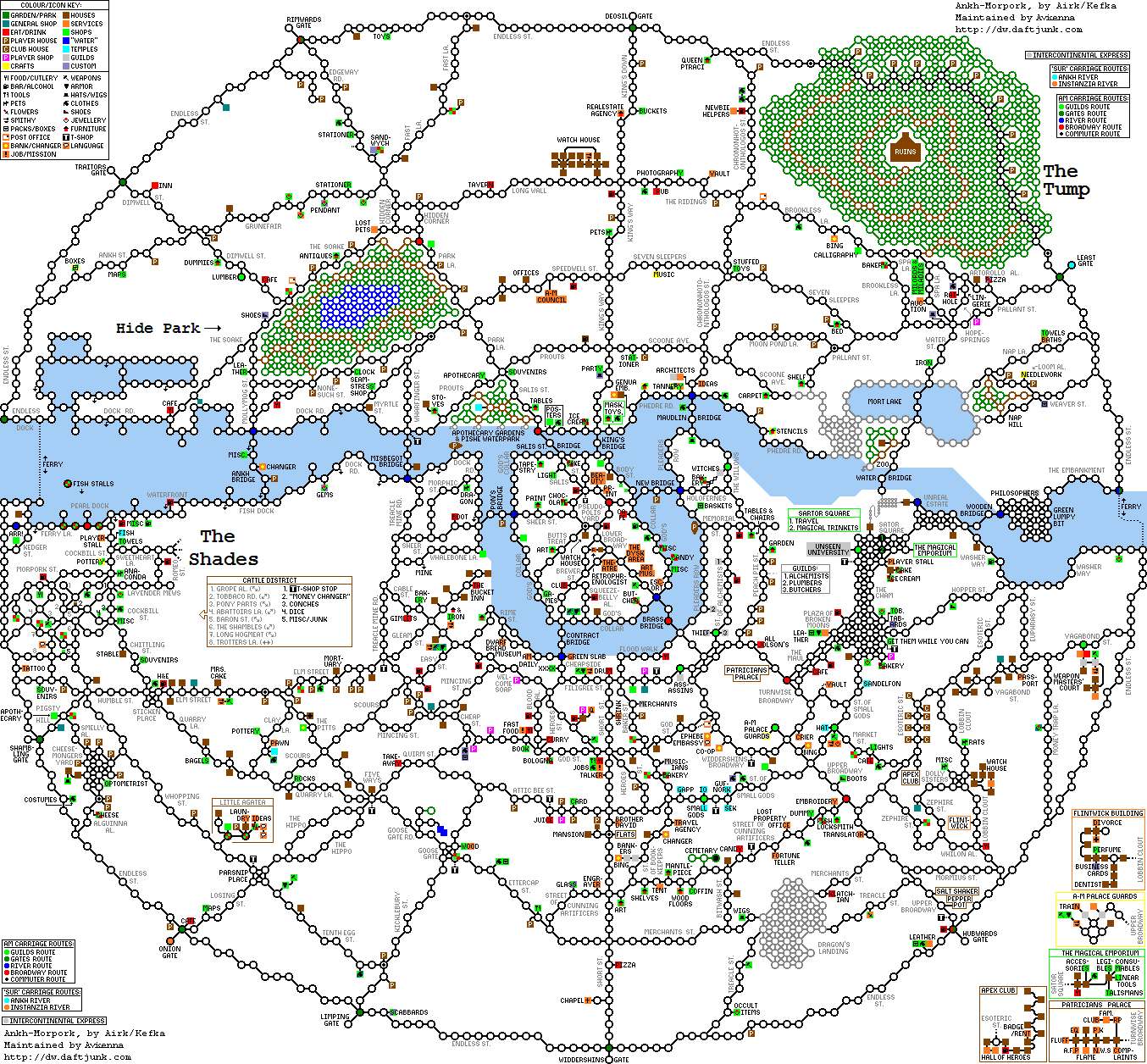 Every little circle on the map is one room, or discrete location. Ankh-Morpork probably has hundreds of streets and buildings with thousands of rooms in total. And there are five or six other cities, numerous villages, and endless miles of terrain to explore as well in the world. Have a look at the atlas to get a better understanding of just how big this place is.

Discworld MUD is not only big, it is complex. Not complex as in overcomplicated, but complex as in “Holy Cow, you can actually do this?!” There are currencies and carriages, languages and quests. The level of detail at which you interact with the world is astounding. For example: I once met another player who thought that it would be fun to scribble something on me with his pen. Not wanting to remain a walking graffito for long, I decided I needed a bath. So I paid a visit to the Assassins' Guild, who happen to have a public bathroom. I turned the tap to fill the tub, added some bubble bath for good measure and unrobed. After washing myself (yes, the ink did come off), I dried myself off with a towel, got dressed again, and went my merry way.

Although the lack of graphics may seem limiting at first, it is actually one of the game's greatest assets. First, it is not much of a hinderance – playing Discworld MUD is much like reading a novel. Secondly, it allows the creators to focus on content instead of trying to keep abreast with the latest trend in computer graphics. Thirdly, and most importantly, this level of detail would be plain impossible to achieve with graphics. 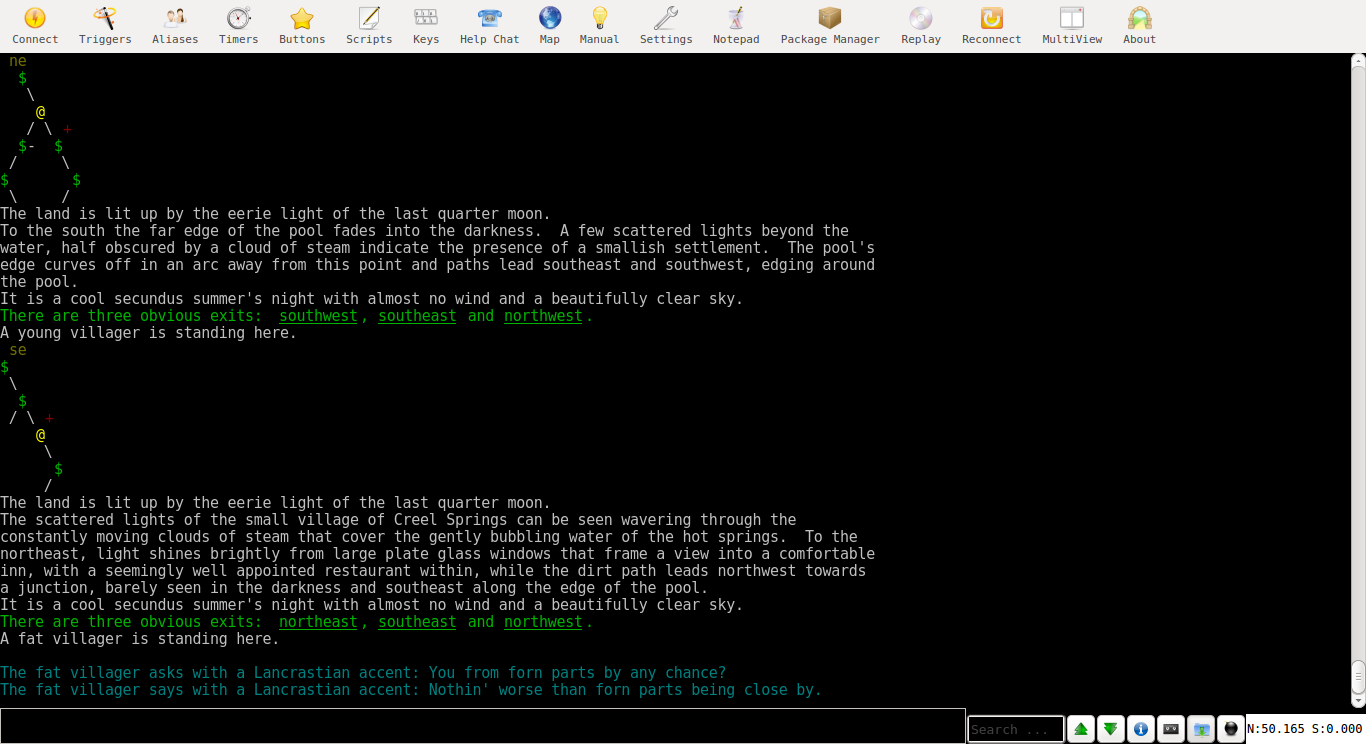 A screenshot taken in a small village in Lancre.

And so, on the Disc, there are constantly new things to discover. (The wiki is a great help, by the way.) But not only is the world itself a sight to see, its inhabitants are worth getting to know, too.

Although its glory days are over, Discworld MUD still has a loyal player base. There are usually between 50 and 100 players online at any one time. A far cry from the big modern MMORPGs, but it is a community that you can get to know over time.

It is a defining feature of the game that it wants to be player-run as much as possible. Two of the cities are governed by player councils that have the power to enact and enforce laws. The guilds are likewise (more or less) democratically organised. There are player-run shops, newspapers, banks, and even a museum. Every once in a while, somebody will come up with an idea for a treasure hunt, or organise an Extreme Tea Party, or decide to marry.

With many of the players having been there for years and sometimes decades, the game even has a feel of history about it. This adds a certain depth to it, but also showcases its greatest weakness: a lack of new blood. Of course, text-based games will never be as popular as their more intuitive graphical counterparts. But I do consider it an unfortunate twist of fate that they have been so thoroughly forgotten. The Discworld would certainly profit from an influx of new players, and I am sure there's quite a few people out there who'd love the game if they only knew about it and made a small effort to learn how it works.

It's worth it. Although I am no longer a regular player, I have spent many happy hours on the Disc. The immense freedom it affords is quite something. The world is, literally, at your finger tips. You can forge whatever path you like at whatever pace you like. Spend all day fighting monsters, or try to map an entire continent, or become the head of your guild. It is entirely up to you. Along the way, you'll meet people and get to know them, you'll become part of a society. And, as Terry Pratchett liked to write, you will live in interesting times. See you on the Disc?

With thanks to Camelion Sinensis for his comments.

A young Discworld player recently wrote an article in the AM Daily about what it's like to start playing Discworld MUD after growing up with graphical games. A copy of the article may be found here.