The Genius of Terry Pratchett

So I've just finished reading another Discworld book, and once again I am struck by the amazing versatility of its author, Terry Pratchett. With rare skill, he manages to make you laugh and think and cry, all at the same time. It's as if he simultaneously touches your heart, your mind, and your vocal chords. I don't read many novels these days, but I happily make exceptions for his. How does he manage that?

Well, for starters there's his humour. If you like PG Wodehouse (of “Jeeves and Wooster” fame), you'll love Pratchett. Pratchett has Wodehouse's terse, clipped British humour; the kind that can get you laughing just as hard at what hasn't been said as at what has. And just like Wodehouse, he mixes it all with a liberal helping (but no overdose) of slapstick comedy and a shriekingly comic cast of characters. But in a way, Pratchett is even better than Wodehouse, because Wodehouse is just writing to be silly whereas Pratchett actually has a (more or less) serious story to tell.

And that he does. His plot and characters are of the finest. He can write a superb detective story just as well as a thriller, or a story about children. His characters, too, can have a depth to them that make them almost human. Even if they're dwarfs. Or trolls. He has a selection of key characters whose development can be followed over the course of numerous novels, and who grow dearer and dearer to the reader with each new book. Samuel Vimes, for example. When we first meet him, in “Guards, Guards”, he is the sorry drunkard captain of a sorry little group of city watchmen (the sort who watch for trouble so they know when to run away). As his story unfolds, he first leaves his drink behind him, then his rank – becoming Commander of the Watch and Duke of Ankh-Morpork. What he doesn't leave behind is the copper in him. No matter what happens, he is a policeman first: probing, alert, and bloody tenacious. Although outwardly rather dour, he is in his own way inspiring. He is brave not because he isn't afraid, but because he cares too deeply to let fear get in the way. And he is devoted to his duty – which is always to serve the law, not his superiors.

Of course, Vimes goes about his work in the great city of Ankh-Morpork. It is a city of men, dwarfs, trolls, rats, and a whole host of other sentient and insentient, dead and undead creatures. Perched, obviously, upon a Disc sitting on the backs of four mighty elephants, who are in turn standing on the back of a great turtle swimming through space. Go figure. The entire Discworld series is one big satire of the whole fantasy genre. Not one trope is spared as Pratchett moves vampires and werewolves, swords and sorcerers across the chessboard of his imagination.

And yet – and this is his greatest genius – a world created to be the most ludicrous, farcical, ridiculous world imaginable turns out to be a straight-up reflection of our own. We see more clearly in a mirror. Like few other authors I know, Pratchett knew how people tick. Sometimes it is a mere half-sentence, an off-hand observation seemingly carelessly interspersed with the story. Sometimes, it is the story. And so it is that you can come away from having read a story of satirical fantasy, and be thinking about the true nature of leadership, or the relationship of the sexes, or the workings of the press in a democracy.

That, in the end, is what I love about Terry Pratchett. He makes me laugh, out loud on my bed, but he also makes me think. And he doesn't see a conflict between the two. I might not always agree with what his story is saying, but I'll have seen the world with another's eyes. Plus, I'll have had a lovely few hours reading a thoroughly good novel.

Addendum: There's over 40 Discworld novels, loosely arranged into various series (see below for an overview). My personal favourites are the Watch novels, although I must admit to only having read a round dozen of the whole oeuvre. If you enjoy the series, you really ought to have a look at Discworld MUD, an online computer game based on this weird and wonderful world. 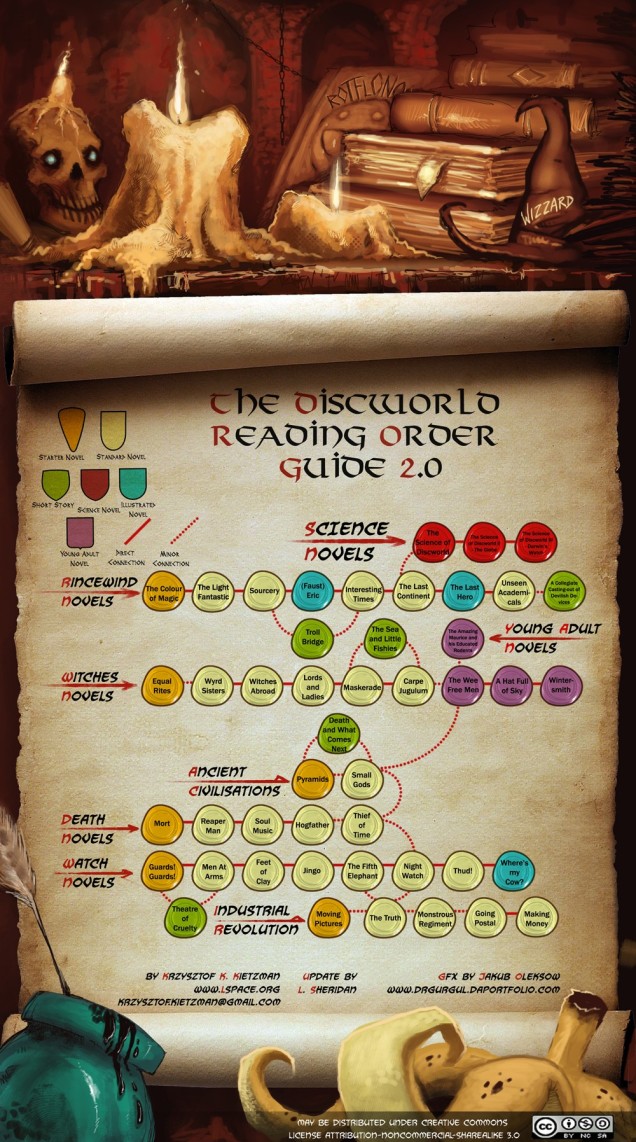