My Journey to the Ants

Ants have always been some of my favourite animals. As a child, I spent hours watching their work and their wars - watching and wondering. In fact, I know few biologists who are not fascinated by ants. I simply had the good fortune of growing up in a place where I had plenty of ant life to see. Having been back in Zambia for a few months, I was able to continue my observations. Here is a “best-of” reel: a small glimpse into the world of African ants.

If you're thinking of the most feared animals of Africa, you're probably not thinking about ants. These ants, however, make that category. Next to snakes, scorpions, and crocodiles, they are probably the animals people give the widest berth.

Driver ants (genus Dorylus) occur throughout the African tropics. They are big, red, and phenomenally aggressive. And they come in huge swarms.

In Zambia, they are usually seen during the rainy season. As nomads, they have no permanent nest, but the whole colony shifts about from one temporary nest to the next. When that happens, they move out in dense trails, guarded by their huge soldiers. Often there will be several trails running more or less in parallel, and sometimes these trails are actually roofed over by interlocking ants. (Driver ants are known to build bridges and even floating rafts using this technique of interlocking workers.)

These trails are not something to disturb - because when you do, the ants get angry and start to run all over the place. So if they happen to be moving through your house, the accepted procedure is just to let them pass. And get out of the house yourself, if you have to…

Sometimes, they don't move in trails, but in swarms. This is the foraging technique that gave them their name, because as they advance - thousands of ants swarming in one direction over a breadth of five meters or more - they drive away anything in their path. Whatever can't flee is eaten: grasshoppers, earthworms, even small mammals. (Pet rabbits often fall victim to driver ants if they are kept in cages or enclosures. The ants get into the fur, and then all bite at once. The shock is enough to kill the rabbit.) 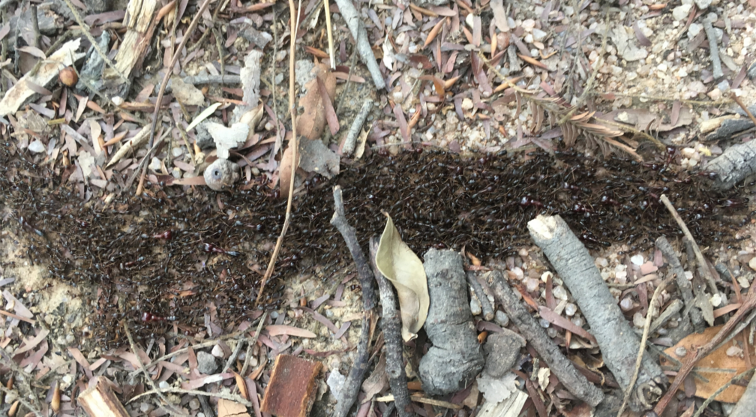 A trail of driver ants 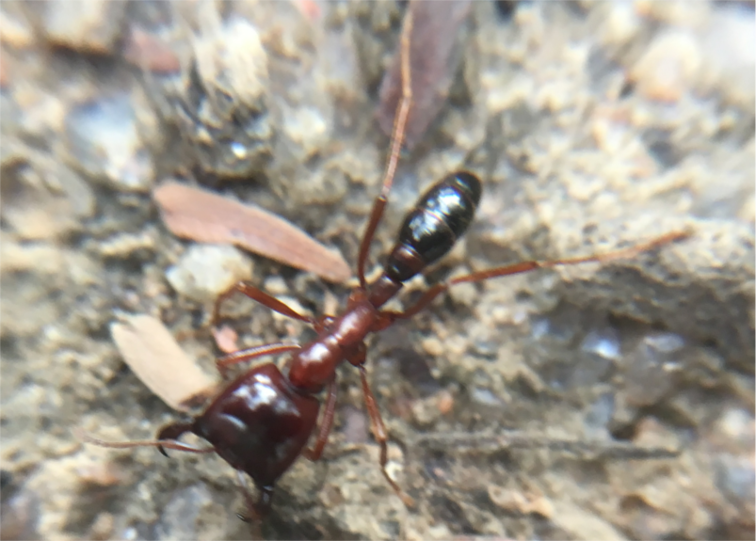 A driver ant soldier standing guard beside the trail.

Matabele ants (Megaponera analis) are my personal favourite. Named after a warlike 19th century African tribe, they specialise on raiding termites. Three times a day, a Matabele nest will send out a detachment of 200-300 workers and soldiers. Running quickly, the large black ants head straight towards a nearby termite nest. (Their raiding radius is approximately 15m, the location of the target is scouted out before the raid.) Once there, they dash inside, grab a termite each and return home before the termites have time to mount a proper defense.

Recently, researchers from my university discovered that Matabele ants actually employ “battlefield medics”. When an ant is injured during a raid (for example by having a leg bitten off), other ants will come to its rescue, carrying it back to base to recover. In this way, a nest significantly reduces its losses and is able to keep up a larger fighting force. (Frank et al. 2017) 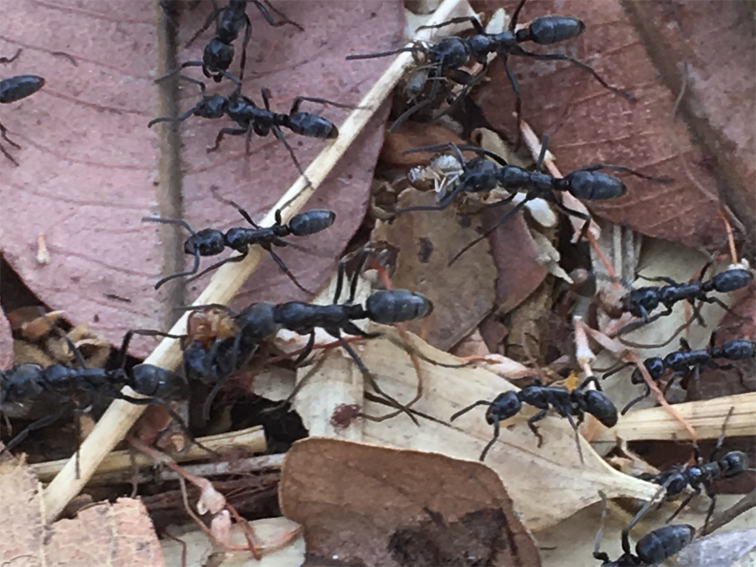 (Matabele ants are not the only ants to prey on termites. Once I found a small termite mound that had been kicked in by a human. Over two days, the damaged nest was besieged by ants of two or three different species. The termite soldiers fought a gallant rear-guard action: blocking the tunnel exits with their large heads, they held off the assailants as the smaller termite workers walled up the tunnel behind them.)

Every year, the start of the rainy season marks the start of a new generation of ants. As the first rains fall in October/November, the ground opens up and thousands of flying ants take to the air.

As eusocial insects, most ant individuals never reproduce, having been born as sterile workers and living only to serve the colony. They gather food, protect the nest, and tend to the larvae. These grow from eggs laid by a queen ant - in the strict order of the nest, she is the one responsible for reproduction. (In some species, a nest will have more than one queen.) But though most larvae grow up to become more female workers, some become queens, or males. And once a year, it is time to mate.

These nuptial flights are impressive events. Over the course of one afternoon and night, all the nests of one species in an area pour forth their offspring. The males and females fly up and away to mate, hundreds of thousands of them. When they land, they shed or bite off their wings and search for a place for a new colony. In the morning, the ground will be covered discarded wings.

Of course, a mass event like this will not go unnoticed by predators. Flocks of hundreds of martins and swifts circle over the area, feasting on a Christmas come early. And humans profit from it too: fried, the large drones of the driver ants (known locally as “inswa”) apparently make quite a tasty snack… 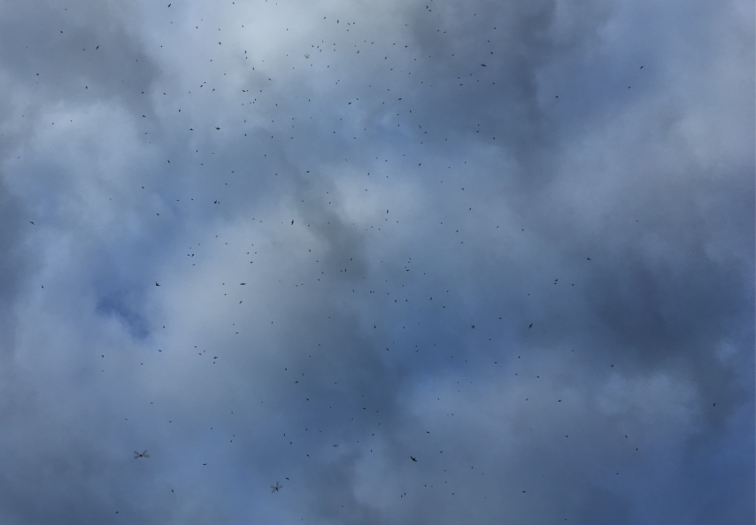 Two flying ants flying up towards a flock of swifts

As has been seen above, ants can be ferocious fighters. They are quite human in that sense: they will not only attack other insects, but also each other. Recently I witnessed a pitched battle between two ant colonies of different species that showcased this quite strikingly.

Unfortunately, I have been unable to identify either of the combatant species due to a lack of appropriate literature and a good camera. However, I know them quite well by sight. (EDIT: The larger species is probably Myrmicaria natalensis.)

The first is a medium large species, with only one caste of workers that are approximately 10mm long. They are brown-black and do not run in trails, but forage singly or in loose groups around a large, ground-level nest entrance. They are not very aggressive.

The second is a lot smaller - about 2mm. They have two worker castes, a major (also called a soldier) and a minor. They are so small you rarely see them, unless you happen to be looking very closely. Usually they restrict themselves to the close proximity of their nests. These, however, are fiercely defended against all comers, no matter what their size.

So walking along a path one day, I noticed three tightly-packed agglomerations of the first species in as many meters. This struck me as strange, because it does not fit their normal behaviour as described above. Looking closer, I realized the large species was not alone. Beside each of their agglomerations was a patch of ground controlled by the second, small species. In fact, it looked a lot like a frontline - one side held by the large species, the other by the smaller one: 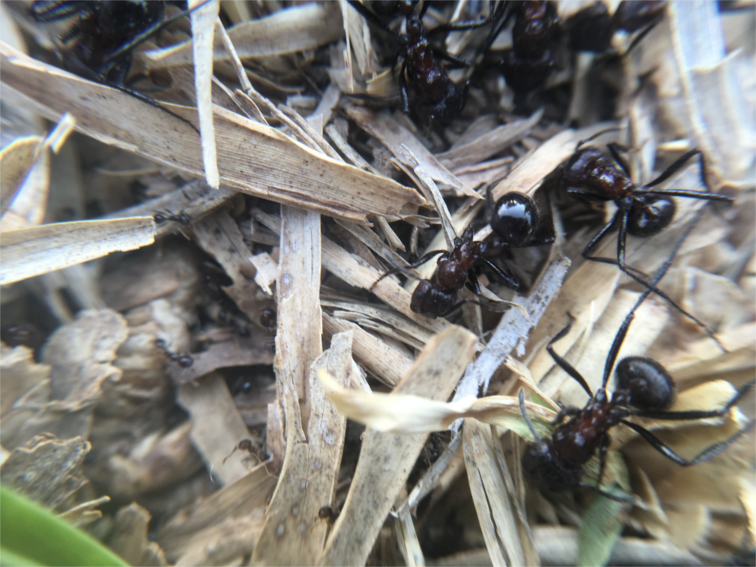 One on one, the small ants were of course no match for their counterparts. But that didn't stop them attacking. They would single out one opponent and attack it in a group, until their target backed off or was helped by a nestmate. The strategy seemed to work: I could see the corpses of several large ants that had foolishly strayed too deep into enemy territory lying about. The rest decided to sit tight and hold the line. For about half an hour, the small ants kept up their attacks, or at least kept threatening towards the others. But eventually the skirmishes got fewer and farther between and a stalemate developed. At this point I left the scene. When I came back the next morning, there were no ants to be seen.

What caused this battle? I honestly don't know. My best guess is that while foraging, the large ants trespassed on the territory of the small ones. These attacked, and as the beleaguered foragers called for help from their nestmates, the agglomerations and the “frontline” formed. Whatever the cause, the fighting got quite severe in places. Here is the picture of a large ant, the severed head of a small warrior still bitten fast to its leg: 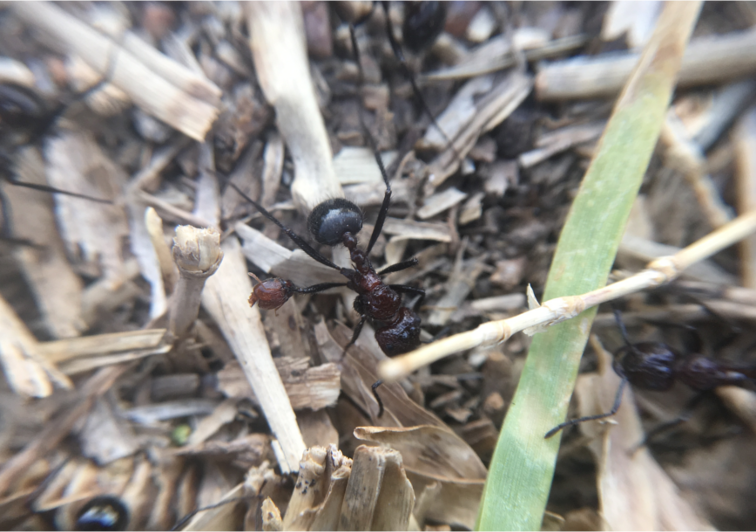 That's war for you. Did I mention ants could be a lot like humans?

P.S. If you found this interesting, I can only recommend the book Journey to the Ants by Bert Hölldobler and E.O. Wilson. (That's where the title of this post was taken from.) It is a fascinating and personal insight into the biology of the ants, written by the two foremost experts in the field.